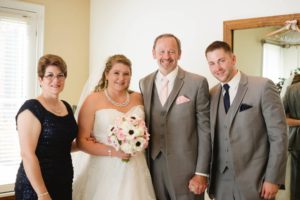 This is the place where I’m supposed to tell you about myself. I don’t really like to talk about myself, but the webmaster says if I don’t he’ll do all sorts of bad things to my computer, and I really need my computer, so here it goes.

I’m originally from Huntsville, Alabama, but when I was seven my dad was transferred up here to Rockville, Maryland. My two brothers and I (I’m the middle child–you know, the well-adjusted one) were involved in every kind of sports growing up. If there wasn’t a game around, we made one up. (Anyone ever play rubberband tag?) After graduating from Peary High School in 1977, I packed up and went to Baylor University, graduating in 1981.

After marrying my high school sweetheart, Pam, we moved to Louisville, Kentucky, to attend the Southern Baptist Theological Seminary. I stayed there way too long, eventually earning a Ph.D. in Old Testament in 1988. (Impressed? Neither is my wife. I’ve learned to live with it.) While we were there our daughter, Angela, was born. From there we moved back down south to Jefferson, Georgia, where I became the pastor of the First Baptist Church of Jefferson.

Jefferson is a little town about an hour from Atlanta and about 30 minutes from the University of Georgia. We enjoyed seven great years there, and had a son, Austin. But eventually we sensed that the Lord was calling us to go back to Maryland where both our families lived, to minister in a culture very similar to the one we grew up in.

We have been back in Maryland since 1995, and raised our family here. Our daughter, Angela, and her husband, Eric, live in Urbana with our grand-dogs. Our son, Austin, joined the Marine Corps shortly after graduating from Walkersville High School and is now back in Frederick County.  Pam and I are enjoying the empty nest, but are also happy to have our children close so we can bond with them on a different level, as you do with adult children. Pam has absolutely been called to a life of service, serving as an EMT and Chaplin in Frederick County. When not saving lives, she’s nurturing souls by serving on teams to encourage other wives of ministers in our region, comforting families through our Stephen’s Ministry, or imply being a friend to those around her. As for myself, I enjoy spending my free time building acoustic guitars.

I believe that this is the work that God was preparing for me from the very beginning. This is a great church full of wonderful, loving people, and I genuinely consider it an honor to be their pastor.

Please feel free to send me an email if you have any questions about developing your personal relationship with Christ, or if you simply want to know more about FBC Frederick.