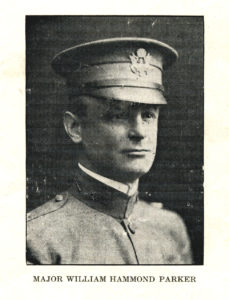 “At date of writing, the city of Frederick has a population est. at 10,500 The organization of this church is the direct result of the able and devoted efforts of Rev. E.B. Hatcher, D.D. Superintendent of State Missions of Maryland. Dr. Hatcher realized early in his work in Maryland that there was need of a Baptist church in Frederick, and at once made the question of its establishment a matter of much prayer, thought and agitation. In the spring of 1904, he secured the services of Rev. Wm. Hammond, of East New Market, Maryland, as State Missionary. Together with him, Dr. Hatcher held a series of special meetings in the Junior Fire Hall during the month of April, 1904. At the close of these meetings, the W.C.T.U. Hall was rented, a Sunday School organized and regular Sabbath evening services were instituted. These were continued with good results until February 1905, when Rev. S.L. Fraser of Hagerstown, Maryland, conducted a series of special meetings held in the church building of the Southern Methodist Church.”

“The need now began to be felt for a suitable building in which to worship. Application was made to the Church Extension Society. As a result of this, an appropriation of $3,500 was made. Work was commenced on this structure in the early part of September, 1905. A lot had been previously purchased from Mrs. S.T. Stull for the sum of $600 (with Mr. Stull donating $300 toward the $600 cost.)” 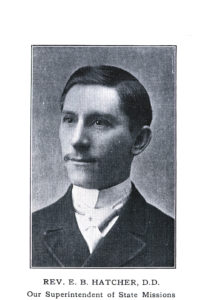 “The church now has a membership of 25. The Sunday School was organized with 9 pupils and now has an enrollment of 108. At the laying of this cornerstone, this 24th day of September, 1905, a sermon was preached by Rev. S.L. Fraser, Pastor of First Church, Hagerstown, and Rev. E.B. Hatcher made an address and officiated at the laying of the cornerstone. Written by William Hammond Parker, 12:45 P.M., September 24, 1905.” (The above is excerpted from the handwritten notes of Rev. Parker that were found in the cornerstone of the first church building.) Rev. Parker ended his relation with our church on November 31, 1907.

The second pastor was F.W. Putney, who came March 1, 1908. He married soon after coming to Frederick and served as pastor for one year.

The Rev. B.A. Bowers came in September, 1914. During his pastorate two additional rooms were built to the parsonage. A modern heating plant was installed in the church and parsonage. More than 100 members were received into the church. On April 30, 1916, Mr. Bowers left to pastor First Church, Baltimore.

The Rev. William Carson Royal was called as pastor effective August 15, 1916. During his first two years a floating indebtedness of $650 and a mortgage of $3,500 were paid. A class room was added to the church at this time. The church had a graded Sunday School, Woman’s Missionary Society, Ladies Aid Society, Sunbeam Band, Royal Ambassador Chapter, Young Ladies Auxiliary, Junior Aid and Senior Young People’s Societies. In the 36 years of Mr. Royal’s pastorate the membership grew and strengthened. A large new educational building and church auditorium were built and dedicated in 1922 at a cost of $110,000. Mr. Royal initiated the Maryland Baptist Summer Assembly in 1917. The assembly was held first in Braddock Heights and later on the campus of Hood College. For most of its years the Annual Sermon was preached at our church during Sunday worship.

The Rev. Robert F. Woodward came in September 1, 1952. To accommodate the increased Sunday School attendance, the church voted on July 17, 1955, to secure a new parsonage and use 219 Dill as a Children’s Building. This change was made at a cost of $30,000.

In 1959 we continued our expansion of Sunday School space with the purchase of 213 Dill Avenue from Lloyd C. Culler for $15,000. In this same year a mission was started in the South End Civic Association building. Our pastor, Mr. Woodward preached at both the FBC and South End services every Sunday until the Rev. J.Thomas Shriner was called in December 1959. FBC gave an equipped parsonage to the church at a cost of $15,000. Over fifty members from FBC served as leaders and teachers in the new church.

In 1961 the property at 220 W. Fifth Street was purchased for $22,000 to be used as a parking lot and a staff residence. Also in 1961, Mr. John M. Grove offered to sell his property at 215 Dill, which was purchased for $18,000 over the period of two years. In 1962, 211 Dill was purchased for $15,000. With this last parcel of adjacent property, plans were begun for a new educational building to accommodate the growing Sunday School and Training Union activities.

In 1962 ministry to the deaf began with Mr. Frank Bryan acting as interpreter. In 1963 our church sponsored a Cuban refugee family.

The new educational building was completed in the spring of 1967 and the older educational unit was remodeled. The entire project including land, building and remodeling cost in excess of $400,000.

In 1974 Robert F. Woodward resigned to accept a call to First Baptist Church of Winchester, Virginia.

On October 6, 1974, the Reverend Burnis D. Barrett assumed his duties as pastor.

In the late 70’s FBC contributed with others to establish the Columbia Baptist Fellowship which still meets today.

During a time of vast differences in thinking in the Southern Baptist Convention, Mr. Barrett was unanimously elected president to the Baptist Convention of Maryland/Delaware, as a moderate and reconciling voice. He led FBC to affiliate with both SBC and the Cooperative Baptist Fellowship.

During the 80’s a Korean Church began meeting in our building for Sunday worship. In 1985 FBC became one of the sponsoring churches for the Thurmont Mission. A debt of $89,000 was forgiven in 1989.  The Thurmont Church was constituted in 1992 and continues as First Baptist Church of Thurmont.

In 1994 Burnis Barrett retired as pastor.  He continues to serve as our Pastor Emeritus.

Our present Vision Statement developed by the Vision Committee was adopted in 1996.

In January 1999 church planters, Bill and Jill Craig, came to begin what is now Summit Trace Church. FBC was its parent church and supported it with our finances, facilities and many of our members serving as leaders and teachers.

After a detailed feasibility study concerning the upgrading of our facilities at our present location, the church voted in June 1998 to purchase property on Bowers Road at a cost of $700,000. This note was paid in October 2002.  We had our first service in the newly completed church building on Sunday, January 20, 2008.